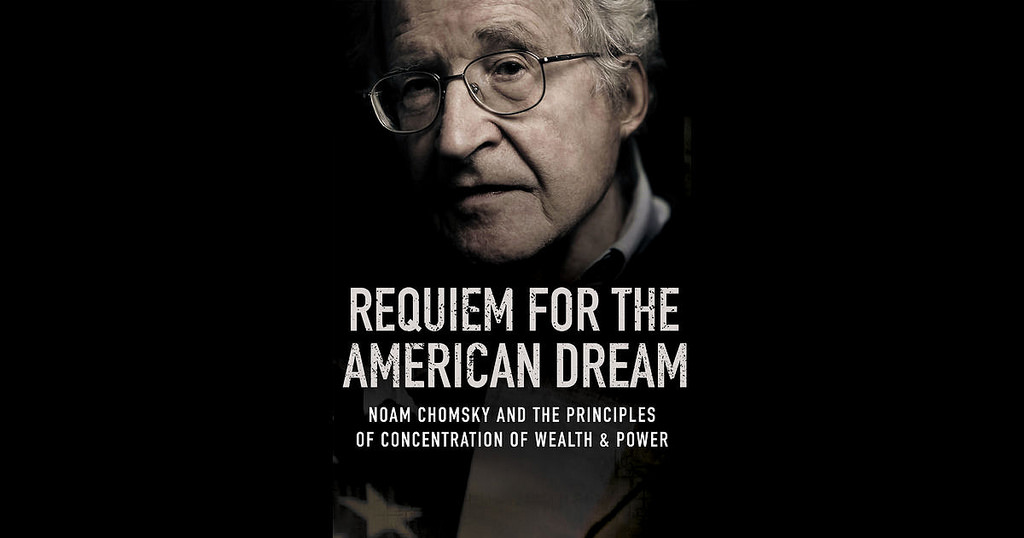 In Requiem for the American Dream, his first major book on the subject of income inequality, Noam Chomsky sharply criticises the fundamental tenets of neoliberalism and casts a sober eye on the economic facts of life. He identifies ten principles of concentration of wealth and power at work in America today. Chomsky devotes a chapter to each of these ten principles, and adds readings from some of the core texts that have influenced his thinking to bolster his argument. His thesis: This „vicious circle“ of measures has led to a corrosion of democracy and thus destroyed step by step the basis of the American Dream.

Noam Chomsky (born 1928) is an American linguist, philosopher, cognitive scientist, historian, political activist, and social critic. He vocally opposed U.S. involvement in the Vietnam War, believing the war to be an act of American imperialism. In 1967, he attracted widespread public attention for his antiwar essay „The Responsibility of Intellectuals“. Associated with the New Left, he was arrested multiple times for his activism. His works range from the study of linguistics and the development of language to the causes of war and the condition of democracies around the world. In 2016, the documentary Requiem for the American Dream was released, summarizing his views on capitalism and economic inequality through a „75-minute teach-in“ (Daniel Gold in the New York Times). Requiem for the American Dream was published as a book in 2017 by Seven Stories Press.

In the introductory chapter to the book, Chomsky explains how in a democracy, public opinion is supposed to influence government policy but more often than not doesn’t. He attributes this to the influence of the privileged and powerful who have never liked democracy. Chomsky sums up the threat to democracy thus:

The Making of Film and Book

Film and book are the result of a collaboration between author and the film crew. To create Requiem for the American Dream, Chomsky and his editors, the filmmakers Peter Hutchison, Kelly Nyks, and Jared P. Scott, spent countless hours together over the course of five years, from 2011 to 2016. After the release of the film version, Chomsky and the editors returned to the many hours of tape and transcript and created a document that included three times as much text as was used in the film.

The Ten Principles of Concentration of Wealth and Power

Right through American history, there’s been an ongoing clash between pressure for more freedom and democracy coming from below, and efforts at elite control and domination coming from above. It goes back to the founding of the country. James Madison, the main framer of the Constitution, who was as much of a believer in democracy as anybody in the world in that day, nevertheless felt that the United States system should be designed, and indeed with his initiative was designed, so that power should be in the hands of the wealth. Because the wealthy were believed to be the more responsible set of men.

Beginning in the 1970s there was a business offensive to try to beat back the egalitarian efforts that went right through the Nixon years. Chomsky: You see it in many respects, over on the right, you see it in things like the famous Powell Memorandum, a „corporate blueprint to doninate democracy.“  The elite was appalled by the democratizing tendencies of the ’60s, and thought we have to react to it. They were concerned that there was an „excess of democracy“ developing.

Since the 1970s, there’s been a concerted effort on the part of „the masters of mankind“, the owners of the society, to shift the economy in two crucial respects. There was first a huge increase in the flows of speculative capital, a shift  from traditional banks to risky investments, complex financial instruments, money manipulations and so on. In the 70s General Electrics could make more profit playing games with money than they could by poducing in the United States. That’s a phenomenon that’s called financialization of the economy. Going along with that is the off-shoring of production. The trade system was reconstructed that it put working people in competition with one another all over the world. When testified to congress Alan Greenspan, Chairman of the Federal Reserve from 1987 to 2006, explained his success in running the economy as based on what he called, „greater worker insecurity.“ Keep workers insecure, they’re going to be under control. They are not going to ask for decent wages or decent working conditions or the opportunity of free association, meaning unionize. These two processes, financialization and off-shoring are part of what lead to the vicious cycle of concentration of wealth and concentration of power.

Solidarity is dangerous. From the point of view of the „masters“, you’re supposed to care about yourself, not about other people. Adam Smith based his whole approach to the economy on the principle that sympathy is a fundamental human trait, but it was driven out of people’s heads. Today we see it in policy formation, for example in the attack on social security. Social security is based on a principle of solidarity. Social security means, „I pay payroll taxes, so that the widow across town can get something to live on.“ Chomsky: If you want to destroy some system: first defund it. We also see it in the attack on public schools. Public schools are also based on the principle of solidarity.

Chomsky: If you look over the history of regulation, say, railroad regulation, financial regulation and so on, you find that quite commonly it’s either initiated by the economic concentrations that are being regulated, or it’s supported by them. And the reason is because they know that, sooner or later, they can take over the regulators. And it ends up with what’s called „regulatory capture.“ The business being regulated is in fact running the regulators.

Concentration of wealth yields concentration of political power, particularly so as the cost of elections skyrockets, which forces the political parties into the pockets of major corporations. Chomsky: The 14th amendment has a provision that says, „no person’s rights can be infringed without due process of law.“ And the intent was to protect freed slaves. I don’t think it’s ever been used for freed slaves, if ever, marginally. Almost immediately, it was used for businesses, corporations. Their rights can’t be infringed without due process of law. So they gradually became persons under the law. Corporations are state-created legal fictions. Maybe they’re good, maybe they’re bad, but to call them persons is outrageous. Undocumented foreigners who are living here and building your houses, cleaning your lawns, and so on, they’re not persons. Moreover, in the 1970s, the courts decided that money is a form of speech. It means that corporations, which have been pretty much buying elections, are now free to do it with virtually no constraint. That’s a tremendous attack on the residue of democracy. It’s an incredible decision, and it puts the country in a position where business power is greatly extended beyond what it always was. This is part of that vicious cycle

Principle #8: Keep the Rabble in Line

There is one organized force which traditionally, with all its flaws, had been in the forefront of efforts to improve the lives of the general population. That’s organized labor. It’s a barrier to corporate tyranny. A major reason for the concentrated, almost fanatic attack on unions, on organized labor, is that they are a democratizing force. They provide a barrier that defends workers‘ rights, but also popular rights generally. That interferes with the prerogatives and power of those who own and manage the society. The U.S. has a long and very violent labor history as compared with comparable societies. The labor movement had been very strong. By the 1920s, in a period not unlike today, it was virtually crushed. By now, less than 7% of private sector workers have unions. The effect is that the usual counter-force to an offensive by our highly class-conscious business class has dissolved.

The public relations industry, the advertising industry, is dedicated to creating consumers, it’s a phenomena that developed in the freest countries, in Britain and the United States, and the reason is clear. It became clear,  a century ago, that it was not easy to control the population by force. Too much freedom had been won. So, other means of controlling people had to be found. It was understood and expressed that you have to control people by controlling their beliefs and attitudes, what  the great political economist Thorstein Veblen called „fabricating consumers.“

Martin Gilens, professor of politics at Princeton University, came out with a study of the relation between public attitudes and public policy. What he shows is that about 70% of the population has no way of influencing policy, and that the population knows it. What it’s led to is a population that is angry, frustrated, hates institutions. It’s taking the form of unfocused anger, attacks on one another and on vulnerable targets. Chomsky: One place you see it strikingly is on April 15th. April 15th is kind of a measure, the day you pay your taxes (In the United States is Tax Day). If a society is really democratic, April 15th would be a day of celebration. It would be a day when the population gets together, decides to fund the programs and activities that they have formulated and agreed upon.

I don’t think we’re smart enough to design, in any detail, what a perfectly just and free society would be like. I think we can give some guidelines and, more significant, we can ask how we can progress in that direction. John Dewey, the leading social philosopher in the late 20th century, argued that until all institutions, production, commerce, media, are all under participatory democratic control we will not have a functioning democratic society.

„In the age of faltering democracies, Noam Chomsky is more relevant than ever“ (Rohit Kumar). Chomsky’s merits: He identifies anti-democratic tendencies in the US in 10 concise points. But although the entire length of book and the film is dedicated to the discussion of the many destabilizing tendencies, hope shines through. Because ultimately Chomsky is an optimist. This shows in the beginning:

„During the Great Depression, which I’m old enough to remember, it was bad–much worse subjectively than today. But there was a sense that we’ll get out of this somehow, an expectation that things were going to get better .“ And it also shows in the Howard Zinn-quote at the end:

„What really matters are the countless small deeds of unknown people who lay the basis for the events of human history. These are the people who have made change in the past; they are responsible for making change in the future, too.“

Kumar, Rohit. „In the Age of Faltering Democracies, Noam Chomsky Is More Relevant Than Ever“ The Wire.