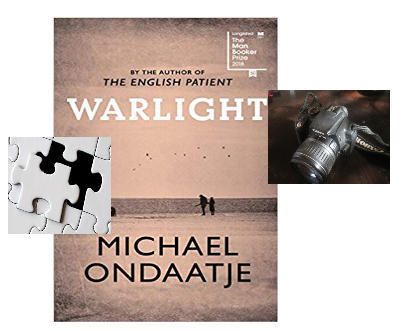 The title refers to a kind of twilight: the dimmed warlight in the wake of the blitz. Warlight was the official name given to light allowed for emergency traffic during blackout hours in Blitz-ridden London in 1945.

In a narrative as mysterious as memory itself – at once both shadowed and luminous – Warlight is a vivid, thrilling novel of violence and love, intrigue and desire. It is 1945, and London is still reeling from the Blitz and years of war. 14-year-old Nathaniel and his sister, Rachel, are apparently abandoned by their parents, left in the care of an enigmatic figure named The Moth. They suspect he might be a criminal, and grow both more convinced and less concerned as they get to know his eccentric crew of friends: men and women with a shared history, all of whom seem determined now to protect, and educate (in rather unusual ways) Rachel and Nathaniel. But are they really what and who they claim to be? A dozen years later, Nathaniel begins to uncover all he didn’t know or understand in that time, and it is this journey – through reality, recollection, and imagination – that is told in this magnificent novel.

The Author
Michael Ondaatje is a Sri-Lankan born Canadian writer. He became world famous for his novel The English Patient (1992), for which he received the Man Booker Prize and the Golden Jubilee Award for the 50th Anniversary of the Prize in 2018. He is a writer with a long literary experience. Warlight is Ondaatje’s eighth novel.

Warlight opens a few weeks after the end of the second world war. After breakfast one morning the narrator, 14-year-old Nathaniel, and his 16-year-old sister, Rachel, are summoned to the garden by their parents. They are told that their father has accepted a job in Singapore for a year, that their mother will accompany him, but Nathaniel and Rachel will not because they had to pursue their school career. In their parents’ absence, they will be in the care of the family’s lodger, the man Nathaniel and his sister call the Moth and whom they suspect to be involved in illicit activities of some sort. The opening line goes:  In 1945 our parents went away and left us in the care of two men who may have been criminals.

In the meantime the children come to terms with their tutor who helps them when they are in trouble, e.g. when Nathaniel was to be expelled from boarding school because of illegally urinating in a basin of the toilet. Nathaniel finds it more exciting to join The Moth in his activities than to go to school, e.g. his job at the Criterion Hotel, where he oversees the „mainly immigrant staff.“

In the second part of the book the narrator tells about his present life. He had bought a small estate in Suffolk. His mother had suddently come back, out of the blue. But she is as uncommunicative as ever.

Characters
Nathaniel
The narrator. A bit younger than his sister Rachel. In retrospect, at the age of 28, Nathaniel tries to reconstruct his past life to understand why he is the one he has become.

Rachel
a little older than her brother. Later, she apparently started an acting career.

Rose
Nathaniel and Rachel’s mother. She had pretended to follow her husband to Singapore, which in retrospect turned out to be untrue. The motives and consequences of her actions are explored in the second part of the story.

The Moth
He is the lodger that Nathaniel’s and Rachel’s parents had engaged to take care of the children during their absence. The „Moth“ is a nickname the children gave him. Later, he allows Nathaniel to accompany him during his activities.

Pimlico Darter
One of The Moth’s connections, a shady character, known for his boxing prowess and hailed as „the best welterweight north of the river“. His real name, we later learn, is Norman Marshall, and he is a consummate smuggler. Nathanial works with The Darter on a river barge carrying illegal cargo, including greyhounds, from France.

Olive Lawrence
An ethnographer and one of The Darter’s lady friends. Nathaniel met her when he accepted a job as historian with the Foreign Office.

The overall subject is self discovery, the mapping of one’s life. The narrator starts from scattered fragments and arrives at a mosaic of sorts. In this process reality, memory, and imagination play an important role. Many secrets remain unsolved, e.g. what happened to their father? Or why Rachel chose the career she did and – last but not least – why the mother is as uncommunicative as ever, although she chose to reappear.

Warlight is not a novel about war and espionage. It’s about uncertainties, secrets and doubts that torment a person in trying to explain his own history. This makes the novel interesting beyond its historical context.

Anna Mundow. „‘Warlight’ is a quiet new masterpiece from Michael Ondaatje.“ The Washington Post (2 May 2018)

Preston, Alex. „Warlight by Michael Ondaatje review – magic from a past master“. The Guardian (5 Jun 2018)