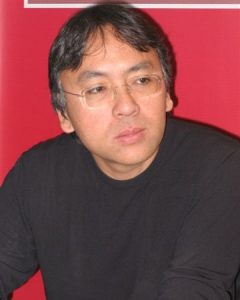 In 2017, the Nobel Prize for Literature went to Kazuo Ishiguro, a British author of Japanese origin (born 1954 in Nagasaki) and Booker prizewinner. The prize motivation: Isiguro wrote „novels of great emotional power“ which have „uncovered the abyss beneath our illusory sense of connection with the world“. https://www.nobelprize.org/nobel_prizes/literature/laureates/2017/ishiguro-facts.html. His work is characterized by „a cautious form of expression that is independent of the events it tells,“ wrote the committee after the announcement. Ishiguro had written three novels: The Remains of the Day (1989), Never Let Me Go (2005), and The Buried Giant (2015).

The Buried Giant, Ishiguro’s latest novel to date, has been eagerly debated in the media. On the narrative level, the author ventures into the field of fantasy literature with a story historically rooted in Britain in the 5th or 6th century. The overarching theme is a key question: what is the point of remembering past suffering over and over again? What would a forgetting bring for the present, but also for the future? The theme of remembering and forgetting is presented both on the individual level, the story of Axl and Beatrice, an elderly Christian couple and on the social level, the coexistence of indigenous people and the new Anglo-Saxon population. 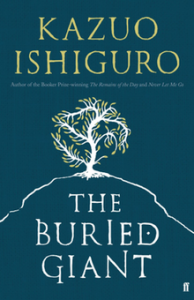 Kazuo Ishiguro’s novel The Buried Giant, published in 2015, is about love, revenge, war and lost memories. It begins with an elderly couple who decides to leave their native village, travels across a troubled land of mist and rain in the hope of finding a son they have not seen in years. The setting: Britain after the withdrawal of the Romans and before the settlement of the Anglo-Saxons. The novel, in the genre of fantasy literature, deals with ogres and other fantasy creatures, but it also raises questions that are still relevant today beyond its historical-mythological background and beyond its literary genre: how to deal with memories? Would it make sense to just let them rest? What is the point in remembering the past over and over again, both on an individual as on a societal level.

On the Mythological Background
Ishiguro said he did some scientific research to get the time accurate. Little is known about the 300 years after the withdrawal of the Romans from Britain, so the author has oriented himself on what people probably thought at the time. They were afraid of dragons, monsters and other magical beings. It was also the time that produced the Arthurian saga. Ishiguro was not interested in the usual Grail or Guinevere stories, but in the historical core of the Arthurian myth, the Migration Period, when the British remnant population had to defend themselves after the withdrawal of Roman legions against rebellious Anglo-Saxons. In Arthur Ishiguro saw above all the resistance fighter. 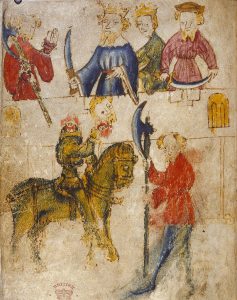 Britain in the 5th century: After bitter wars between the tribes of the British and Anglo-Saxons, the country is devastated. A fog of forgetting hovers over the land. The peoples live in peace, but it is a fragile peace. Axl and Beatrice have been a couple for many years. In their village, they are considered outsiders, and they are made to understand that they are a burden on the community. So they decided to leave their homeland hoping to find their son, whom they have not seen in a long time. On their dangerous journey, they meet a knight, a dragon, fighters, monks, goblins and ogres and again and again the fog of forgetting, which begins to clear in some places. While Beatrice cannot wait for the return of her memories, Axl is more and more afraid of them. Everything seems to get out of balance, even their relationship.

Memory and Forgetting
The giant of the title refers to a dragon whose breath causes forgetfulness and allows Saxons and Britons to live side by side. The „buried giant“ is a metaphor for the atrocities that had happened in the past, are now buried, but are yet leaving a lingering sense of remembrance.

In various interviews Ishiguro talked about the key question that had motivated him:

When should we remember and when is it better to forget … especially uncomfortable memories from the past. We cling to uncomfortable memories from the past. We damage the past and damage the future. It damages the people around you. And yet if you refuse … this will be a problem as well. That is a keyboard question that most of us face. That fascinated me on the societal as well as on the individual level. … In The Buried Giant I have tackled the question on both levels for the first time.

There are follow-up questions:

There are … differences in how a society remembers and forgets. … What are the mechanics? Where are the memory banks? Who controls them in a society ? How do you manipulate them? Of course they are munipulated. There is a huge battle over a society’s memory because it determines where a community goes next.

The reception of the novel was split. James Wood wrote in The Newyorker:

He (i.e. Ishiguro) has written not a novel about historical amnesia but an allegory of historical amnesia, set in a sixth- or seventh-century Britain, amok with dragons, ogres, and Arthurian knights. The problem is not fantasy but allegory, which exists to literalize and simplify. The giant is not buried deeply enough.

Focusing on one single reading of its story of mists and monsters, swords and sorcery, reduces it to mere parable; it is much more than that. It is a profound examination of memory and guilt, of the way we recall past trauma en masse. It is also an extraordinarily atmospheric and compulsively readable tale, to be devoured in a single gulp. The Buried Giant is Game of Thrones with a conscience, The Sword in the Stone for the age of the trauma industry, a beautiful, heartbreaking book about the duty to remember and the urge to forget.

Ishiguro’s novel proves that even a fantasy novel that plays in a long time ago in a mythological past, is able to transport topics of current relevance. However, there must be a genuine interest in fantasy creatures that carries you through 338 pages.