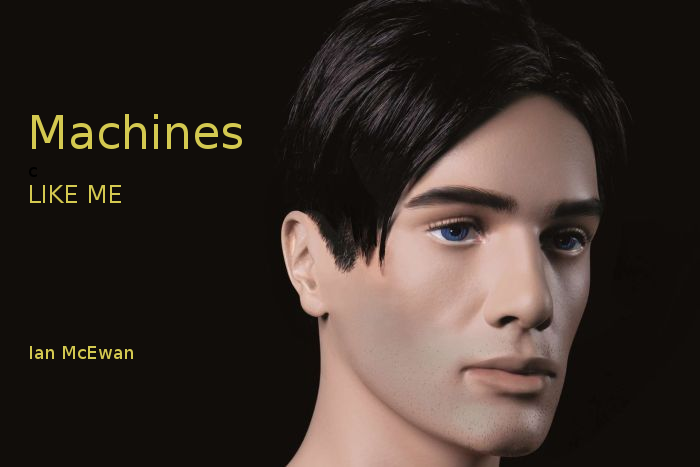 A love tale between a man, a woman and …  a robot in a counterfactual 1980s Britain

Charlie, in his thirties, drifting through life and dodging full-time employment, is a person who tries to make the best of things. Miranda, ten years younger, is a bright PhD student, who lives upstairs. When Charlie comes into money, he buys „Adam“, one of the first synthetic humans and – with Miranda’s help – designs Adam’s personality. The near-perfect human machine that emerges is beautiful, strong, and clever. It isn’t long before a love triangle forms.
The novel examines the question what it’s like to live with a human-like robot.

Ian McEwan  is a British novelist whose works have earned him worldwide critical acclaim. He is the recipient of the Man Booker Prize for Amsterdam (1998), the National Book Critics‘ Circle Fiction Award, and the Los Angeles Times Prize for Fiction for Atonement (2003). Machines Like Me is the seventeenth novel by the award/prize-winning British author. “What’s been preoccupying me the last two or three years is what it would be like to live with a fully embodied artificial consciousness, I’ve written a novel which takes as a starting point the delivery of such a machine.“

Setting
The novel is set in 1982 in an alternative, reinvented London. A devastating Argentinian attack ends the war abruptly and the Falklands become Las Malvinas. The humiliation of defeat forces Margaret Thatcher from office, brings a very different politician to power, and triggers the country’s unexpected departure from Europe. (Marcel Theroux) The UK is precociously computerised. Internet and artificial intelligence have been around for decades. This was essentially the merit of the scientist Alan Turing, who is celebrated as a hero because of his pioneering work in the field of artificial intelligence had led to a series of technological breakthroughs: the latest and most expensive consumer electronics device is „a man of plausible intelligence and looks, believable movement and expressiveness“.

Charlie is 32 and lives alone in a small unpleasant flat in Clapham, south London where he plays the stock market from a home computer without much success. He is a trained anthropologist with an enthusiasm for computers who hopes to give his life meaning by experimenting in ‘electronics and anthropology‘. „I made a reckless decision, but I was encouraged by reports that Sir Alan Turing, war hero and presiding genius of the digital age, had taken delivery of the same model. He probably wanted to have his lab take it apart to examine its workings fully.“
Miranda is a 22-year-old PhD student of social history and ten years younger than Charlie. She has a past that she hides. Charlie begins a romance with her.
Adam is a new kind of robot who, once programmed with a personality, might pass for a human. Charlie and Miranda join forces in programming him with a personality. Adam was not a sex toy. However, he was capable of sex. He was advertised as a companion, an intellectual sparring partner, friend and factotum who could wash dishes, make beds, and „think“. In every moment of his existence, everything he heard and saw he recorded and could later retrieve.

When Charlie comes into money he buys a robot. „I was among the optimists, blessed by funds following the my mother’s death and the sale of the family home. „The first truly viable manufactured human with plausible intelligence and looks, believable motion and shifts of expression went on sale the week before the Falklands Task Force set off on its hopeless mission.“ Twelve of the first edition were called Adam and thirteen were called Eve. Charlie would have preferred an Eve, but they had all been sold out, so he had to make do with an Adam. Adam cost £86,000. He brought him home in a hired van to his flat in North Clapham. With the assistence of Miranda, the student from upstairs, he unboxes his robot and together they programmed Adam’s personality. Sooner or later, Adam falls in love with the narrator’s girlfriend. Once Adam is persuaded to stop making love to her, he writes haikus to her. Haiku is a traditional Japanese poetic form. It is considered to be the shortest poetic form in the world. For Adam haikus are the literary form of the future. The clear seventeen-syllable statement show how things are. In his final haiku to his loved one, Miranda, a haiku expresses his regrets.

McEwan: „What I wanted to pursue was the idea of a creature who was morally superior to ourselves. My ambition was to create a set of circumstances in which Adam would make decisions that we would see as severe and antihuman, but in many senses were both logical and ethically pure.“ (Edge)

Robots will increasingly share our physical space. They already represent a significant proportion in our lives. Industrial robots help us with transport and logistics tasks. With the help of robots, research is conducted, fraud detected, etc. Intelligent machine systems are changing our lives for the better. But where are the boundaries, the red lines that should not be crossed? McEwan has an unshakable faith in that novels are a good space to examine ethical dilemmas. However he didn’t want to write a science fiction novel. That’s why he transfers his story into a reinvented past. He wanted to create a „creature that is morally superior to us“.  Adam is just a personal computer, intended solely for private use. But what if the use of a „creature that is morally superior to us“ is extended to the public sphere? Will we, against our reservations, blindly trust them to act to our benefit?